The “Continuing” group moved to the Central Mission Hall in Sinclair Road and were once more by a strange co-incidence a church of fishermen meeting in Sinclair Road.  Their guiding light in setting up their Continuing Church was to be their revered Mr. Murray. Few, by reason of their calling, had much experience of the complexities of Presbyterian church government. Indeed, as a result of their experience during 1929 they had a deep seated distrust of Presbyterian leadership.

The United Free Church Continuing was by this time set up throughout Scotland but it had few men and little money. Torry was fortunate in having Rev. E. Lewis Neilson, who had seen service in the ministry of the church at home and abroad, able to preach from week to week. The Church called him as minister and he was inducted on the 11th December 1931.

It was a time of great joy. Friends of the congregation came from near and far, among them the widow of Mr. Murray. She was offered travelling expenses but suggested that the money be used to start a Building Fund. At the next meeting this "widow's mite" was mentioned. A  Church Building Committee was set up and within little more than a year had amassed two-thirds of the cost of a new church (the work of collecting this remarkable sum took, according to a press report, exactly eight minutes), laid the foundation stone and dedicated the completed church. The service was held on 15th April 1933. 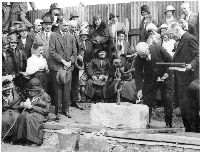 The need was made plain to the people. The elders went round with collecting baskets, and the people gave. All the money to build and equip the church and halls and to buy a manse was given in this way. Part at least of the giving meant real sacrifice.

These first ten years ended on a sombre note. Mr Neilson left to go to Fort William. The international situation was worsening and dragging on towards the Second World War.

Rev. W. Cameron Young was minister from 1939 to 1947. A man of great strength of character. To the young men, called to serve in war, he supported them in the fullest way possible as their minister. Before leaving home to join H.M. Forces, he gave each a Bible suitably inscribed. He kept in touch with them; prayed with their families, and met with fathers of those on active service, for prayer in the vestry each Sunday morning.

At a time when fathers were away and mothers and grandparents were left to bring up the children, he began a campaign to bring in the children during the school holidays. The young people of      the Church invited all the children to a daily children's service at 2.30 in the Church during the school holidays. This was run by the minister. There we had a fairly strong element from the Balnagask district and because some of these children were very needy, they received special help from the congregation.

When the Government insisted that all teenagers must be members of an organisation for young people, the decision was taken to start the Girls' Guildry and the Boys' Brigade so that our young people would be kept under the wing of the Church.

His great musical heights were undoubtedly reached with his "Fishermen's Choir", which consisted of past and present fishermen of the congregation. Many would agree that it was probably the finest male voice choir they have ever heard.